Better 3D reconstructions from less data with ultra-stable gold supports for cryo-electron microscopy that reduce the movement of frozen specimens during imaging. 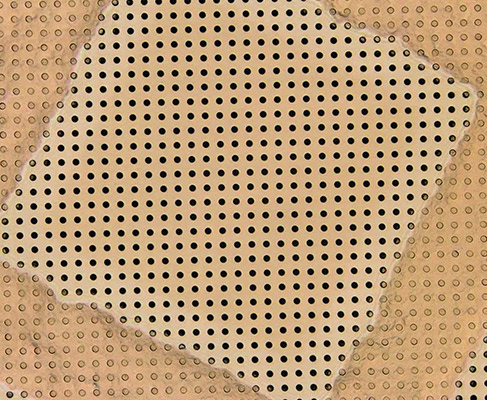 During imaging at cryogenic temperatures, traditional carbon supports move, particularly at the beginning of irradiation. This movement blurs images and reduces data quality. UltrAuFoil® Holey Gold supports are more conductive, and there is no differential contraction between the grid and the foil on plunge freezing. Therefore there is less crinkling of the foil during sample preparation, resulting in many improvements in data quality.

Other combinations on request

UltrAuFoil® are an exciting development in specimen support technology. As many customers would like to know more about them, we've gathered together some of the most frequently asked questions below, but if there's anything you're still not sure of please ask us or your local distributor - we're happy to help.

Using the same metal for both the grid and the foil improves the quality of your data because it reduces beam-induced motion caused by changes in the geometry and tension of the foil due to the elimination of the differential thermal contraction between grid and metal during plunge vitrification and sample irradiation. As discussed in Russo and Passmore, Science 346: 1377-1380 (2014) and Russo and Passmore. J. Struct. Biol. 193: 33-44 (2016).

Gold has several properties that make it ideal as a sample support in electron microscopy, including being conductive, non-oxidizing, radiation-hard.  In addition, it is does not interfere with the specimens you are studying as it is chemically inert and biocompatible, as described in Russo and Passmore, 2014 and 2016.

A foil thickness of 400-500 Å provides optimum data quality by balancing the need for the thinnest possible layer of ice with sufficient thickness of the gold foil to minimize beam-induced motion.

A thicker foil will not further reduce beam-induced motion, but risks degrading data quality due to thicker ice resulting in poor particle dispersion and increased background scatter. In contrast, a thinner foil might offer better particle dispersion due to the formation of a thinner layer of ice, but at <400 Å, the foil is thinner than the individual gold nano-particles it is made from and this increases beam-induced motion due to poorer conductance as the surface becomes uneven. See Russo and Passmore, 2014 and 2016 for further details.

As with our other products, UltrAuFoils® should be stored in a grid storage box in a cool, dark, low-humidity environment. While there is no date of expiry for the UltrAuFoils® we generally recommend using them within two years.

UltrAuFoil® sample supports are ready to use straight from the box. However, as with all transmission electron microscopy grids, users may achieve better sample dispersion and improved wetting if the foils are made more hydrophilic. This can be achieved using standard glow discharge and plasma systems, as described here. UltrAuFoil® grids particularly benefit from these treatments, as, lacking the more volatile carbon foil, they can be safely exposed to extended glow discharge or plasma treatment without risk of any surface degradation.

Yes. We are happy to supply UltrAuFoil® with an ultrathin carbon layer at a thickness of your choice (most commonly 2 nm, but 3, 5 and even 10 nm additional carbon layers are available on request). Alternatively, you may add an additional layer of amorphous carbon yourself: standard float transfer methods, as described in Passmore and Russo, 2016, are recommended to transfer thin films of carbon onto UltrAuFoils®.

Data collection can be carried out as you would for holey carbon foils with similar geometries. Thus, we recommend that the electron beam geometry is circularly symmetric and centered on the hole. The micrograph is taken at the center of the hole. We would recommend including a small section of the support foil in each image, as this aids with focussing (see "How do I focus using UltrAuFoils®", below)

Since there is no amorphous material in the gold support structure, Thon rings cannot be used to focus. Russo and Passmore, 2016, present a number of different options for focussing when using UltrAuFoils®, but the two simplest are:

We recommend using a calibration specimen to correct the stigmation and beam tilt prior to collecting data on UltrAuFoils®.

No, they should be handled in the same way as traditional carbon foils, and are similarly robust. As with traditional carbon foils, care should be taken when handling the foils with tweezers and during plunge freezing, as if the foil is damaged in these processes, the stability of the support may be severely degraded. We recommend collecting data only from squares where the foil is uniform and intact.

In addition, the gold foil is not volatile when glow discharged or treated with plasma, so the grids may be subjected to far more extensive plasma treatments than standard carbon foils, without any risk of degrading the surface.

Dr Christopher J Russo and Dr Lori A Passmore of the MRC Laboratory of Molecular Biology, Cambridge, UK invented these sample supports and they are produced under license by Quantifoil Micro Tools, GmbH.

Chris Russo and Lori Passmore have written two very informative papers about the characteristics of these grids and how they compare to more traditional holey carbon foils.